I previously talked about using Synergy to control different computers with a single keyboard / mouse. Synergy is a great way to replace your KVM (Keyboard, Videon, Monitor) switch to software switch that can be used to connect multiple computers.  https://goo.gl/UDptSxThe picture below is the method I use. I used iMac and Macbook pro with a single keyboard and mouse using Synergy. Of course, if you are using a secondary monitor on each computer, you can use the additional screen without any problems. My MacBookPro uses the second monitor and the iPad’s Duet app as a third monitor, which works well with Synergy. 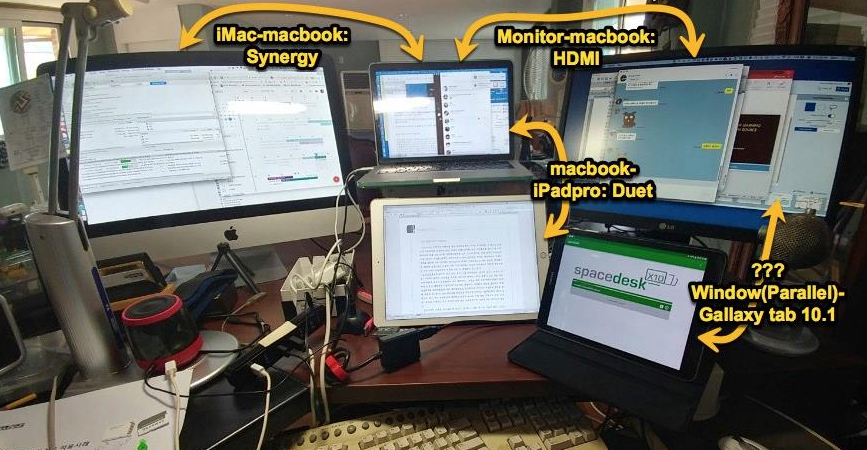 My Window OS runs on Parallels in my MacBookPro as a virtual machine, which sometimes intercepts external interfaces like USB-drive or screen-connection devices. The solution is to suspend the parallels for a while and connect them. After reactivating Window OS, it runs OK.

In the hot summer like these days, iMac has generated a lot of heat, so I looked for a way to use the iMac as a secondary monitor in the hope that it might reduce the burden of CPU…. https://goo.gl/fdHkvz

Thunderbolt cable was expensive. After connecting the cables, you can use the second monitor simply by pressing the Cmmand-F2 key on your iMac. But this method didn’t solve the heating problem. iMac still genrats heat. Steve Jobs may be good at creativity, but I think Mac computers’s heating  problem is a serious engineering design problem of Apple.