In my high school, I was not a good math student. So I envied my friend who is good at math. In middle school, I was learning trigonometric functions and wondered where to use them, but not many people to ask. Because I’m introverted to ask and only motivation of learning was going college. I just thought it would be necessary in college study.
In the first year of college, I learned the engineering mathematics. Electrical engineer need to learn emphasising complex numbers, sine waves, calculus simultaneous equations, Laplace, and Fourier transforms. It was painful to learn very abstract ideas.

Humans have difficulty understanding new things unless they actually see or experience them. So, while studying, you have to do it yourself and you can understand it when you see it. And I think it’s easy to get to the stages of analysis and application, as Bloom said so that you can apply what you’ve learned as you make things. But math is often difficult in doing like it.

So when I teach students, I always like to show them visualization and math tools. This made it easier to understand, apply, analyze, and evaluate knowledge. In that sense, a tool like Geogebra is very useful. More specialized tools include tools like Matlab, Mathematica, and Maple, all of which must be purchased and cost you money. There are open-source tools that do the similar function called Octave. Octave. In fact, the name comes from the developer’s name and is available for all types of OS. On Windows and Linux (Ubuntu), you can install and use it yourself, and on Mac, you can use a virtual machine. You can install it using the Package Manager.

I used to use several package management tools, I think it’s best to just install VirtualBox, an open source virtual machine, and install Octave. I had problems with installing and running Octave on a version of Ubutu 14, and I had problems with Virtualave 6.0.14 Ubuntu using 18.04.3, so I was able to install a symbolic package that was so corrupt. Installing packages is easy if you use the sudo command.

This is the full launch screen on Ubuntu. Ubuntu runs perfectly on Mac 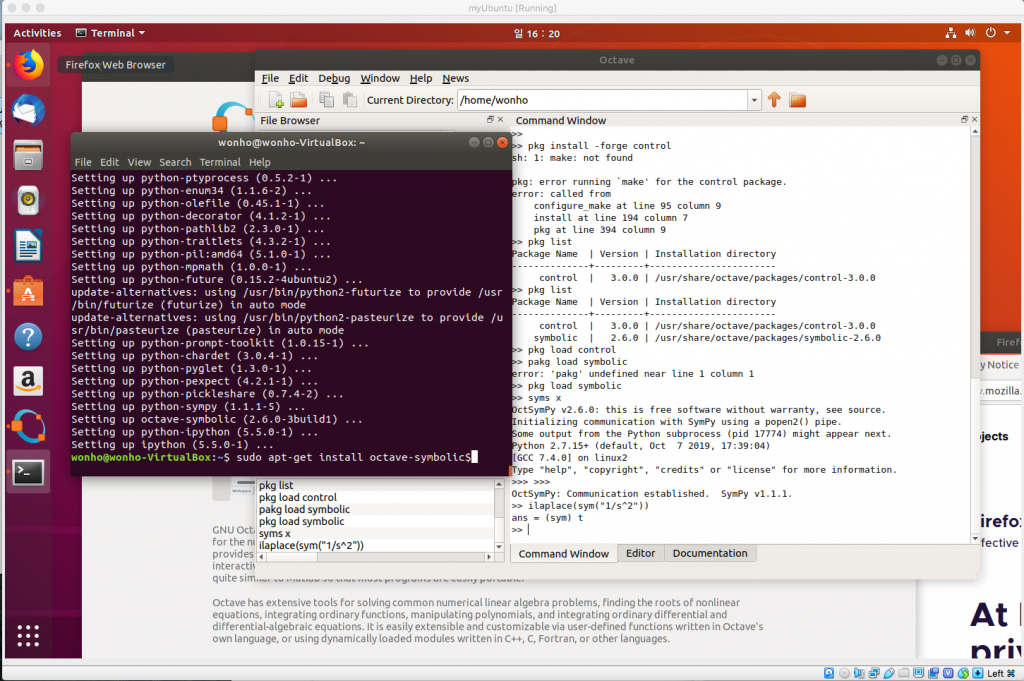 What can I do with this? Calculus, differential equation solving, equation expansion, factorization, Laplace transform, and Laplace inverse are available. Please refer to the following post.